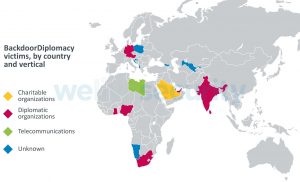 On
Posted on Jun 10, 2021
in category
Categories Top News

BackdoorDiplomacy: Upgrading from Quarian to Turian

An APT group that we are calling BackdoorDiplomacy, due to the main vertical of its victims, has been targeting Ministries of Foreign Affairs and telecommunication companies in Africa and the Middle East since at least 2017. For initial infection vectors, the group favors exploiting vulnerable internet-exposed devices such as web servers and management interfaces for networking equipment. Once on a system, its operators make use of open-source tools for scanning the environment and lateral movement. Interactive access is achieved in two ways: (1) via a custom backdoor we are calling Turian that is derived from the Quarian backdoor; and (2) in fewer instances, when more direct and interactive access is required, certain open-source remote access tools are deployed. In several instances, the group has been observed targeting removable media for data collection and exfiltration. Finally, both Windows and Linux operating systems have been targeted.

BackdoorDiplomacy shares commonalities with several other Asian groups. Most obvious among them is the connection between the Turian backdoor and the Quarian backdoor. Specific observations regarding the Turian-Quarian connection are recorded below in the Turian section. We believe this group is also linked with a group Kaspersky referred to as “CloudComputating” that was also analyzed by Sophos.

Several victims were compromised via mechanisms that closely matched the Rehashed Rat and a MirageFox-APT15 campaign documented by Fortinet in 2017 and Intezer in 2018, respectively. The BackdoorDiplomacy operators made use of their specific form of DLL Search-Order Hijacking.

Finally, the network encryption method BackdoorDiplomacy uses is quite similar to a backdoor Dr.Web calls Backdoor.Whitebird.1. Whitebird was used to target government institutions in Kazakhstan and Kyrgyzstan (both neighbors of a BackdoorDiplomacy victim in Uzbekistan) within the same 2017-to-present timeframe in which BackdoorDiplomacy has been active.

Victims have been discovered in the Ministries of Foreign Affairs of several African countries, as well as in Europe, the Middle East, and Asia. Additional targets include telecommunication companies in Africa, and at least one Middle Eastern charity. In each case, operators employed similar tactics, techniques, and procedures (TTPs), but modified the tools used, even within close geographic regions, likely to make tracking the group more difficult. See Figure 1 for a map of victims by country and vertical. Figure 1. Victims by country and vertical

BackdoorDiplomacy targeted servers with internet-exposed ports, likely exploiting unpatched vulnerabilities or poorly enforced file-upload security. In one specific instance, we observed the operators exploit an F5 BIP-IP vulnerability (CVE-2020-5902) to drop a Linux backdoor. In another, a Microsoft Exchange server was exploited via a PowerShell dropper that installed China Chopper, a well-known webshell in use, by various groups, since 2013. In a third, we observed a Plesk server with poorly configured file-upload security execute another webshell similar to China Chopper. See Figure 2 for an overview of the exploit chain.

Following the initial compromise, in many instances the BackdoorDiplomacy group employed open-source reconnaissance and red-team tools to evaluate the environment for additional targets of opportunity and lateral movement. Among the tools documented are:

Of the tools listed above, many were obfuscated with VMProtect (v1.60-2.05), a recurring theme with BackdoorDiplomacy tools.

In one such instance, the operators uploaded, via a webshell, both ScnCfg.exe (SHA-1: 573C35AB1F243D6806DEDBDD7E3265BC5CBD5B9A), a legitimate McAfee executable, and vsodscpl.dll, a malicious DLL named after a legitimate McAfee DLL that is called by ScnCfg.exe. The version of vsodscpl.dll (SHA-1: FCD8129EA56C8C406D1461CE9DB3E02E616D2AA9) deployed was called by ScnCfg.exe, at which point vsodscpl.dll extracted Turian embedded within its code, wrote it to memory, and executed it.

On a different system, operators dropped a legitimate copy of credwize.exe, the Microsoft Credential Backup and Restore Wizard, on disk and used it to execute the malicious library New.dll, another Turian variant.

About half of the samples we collected were obfuscated with VMProtect. A compilation of observed operator commands is included in the Operator commands section. Unique network encryption schemes are individually discussed below as well.

The initial reporting by Kaspersky notes that the victims of Quarian were at the Syrian Ministry of Foreign Affairs, a similar target-set of Turian.

In many of the Turian samples we collected, there are obvious similarities with Quarian. Mutexes are used by both to verify that only one instance is running, although the mutexes used are dissimilarly named. We observed the following mutexes used by Turian:

Turian and Quarian both read the first four bytes from the file cf in the same directory as the malware’s executable, which are then used as the sleep length as part of the C&C beacon routine.

The Turian network connection process follows a similar pattern to Quarian, attempting to make a direct connection. If that fails due to a local proxy with a response of 407 (Authorization Required), both try to use locally cached credentials. However, the request sent to the proxy by Turian does not contain any of the grammatical mistakes that Quarian sent. See Figure 3 for a comparison of proxy connection attempts.

Finally, both Turian and Quarian create a remote shell by copying cmd.exe to alg.exe.

After initial execution, Turian establishes persistence by creating the file tmp.bat in the current working directory, writing the following lines to the file, then running the file:

Turian then checks for the presence of the file Sharedaccess.ini in its working directory. If that file is present, Turian attempts to load the C&C IP or domain from there, if present. We did not observe Turian pass IPs or domains in this manner but testing confirmed Turian looks to load the C&C address from here first. After checking Sharedaccess.ini, Turian attempts to connect with a hardcoded IP or domain and sets up its network encryption protocol.

Quarian is known to have used both an eight-byte XOR key (see Talos on Quarian: Reversing the C&C Protocol) and an eight-byte nonce to create a session key (see ThreatConnect on Quarian Network Protocol Analysis in Divide and Conquer: Unmasking China’s ‘Quarian’ Campaigns Through Community). Turian has a distinct method for exchanging network encryption keys. See Figure 4 for a breakdown of the Turian network encryption setup. After receiving the last 56-byte packet, Turian calls the network encryption initialization function in Figure 5, and accepts the 56 bytes of data in the last C&C packet as the only argument. A second network encryption setup was also observed, as depicted in Figure 6. The last iteration of the four-iteration loop (QWORD byte[5]) is used as the seed for the key initialization function, as shown below in Figure 7. The full list of Turian operator commands is shown in Table 1.

A subset of victims was targeted with data collection executables that were designed to look for removable media (most likely USB flash drives). The implant routinely scans for such drives, specifically targeting removable media (return value of GetDriveType is 2). If found, the implant uses an embedded version of WinRAR to execute these hardcoded commands:

The parameters in the command break out to:

The implant, upon detecting a removable media being inserted, attempts to copy all the files on the drive to a password-protected archive and puts the archive in the following directory, which is hardcoded and so the same for every victim:

The implant also has the capability to delete files, based on the third command listed above.

Occasionally, BackdoorDiplomacy’s operators require a greater degree of access or more interactivity than that  provided by Turian. On those occasions, they employ open-source remote access tools such as Quasar, which offers a wide variety of capabilities and runs on virtually all versions of Windows.

We discovered, via a shared C&C server domain, a Linux backdoor using similar network infrastructure and that was deployed after exploiting a known vulnerability in F5 BIG-IP load balancers’ traffic management user interface (TMUI), which permits remote code execution (RCE). The Linux variant attempts to persist by writing itself to /etc/init.d/rc.local

Next, it runs through a loop to extract strings from memory:

Then, it calls its daemon function and forks off a child process which then begins the work of decrypting the C&C IP address and/or domain name then initiates a loop that reaches out to the C&C using Mozilla/5.0 (X11; Linux i686; rv:22.0) Firefox/22.0 as its user-agent. This C&C loop continues until a successful connection is made. Once a connection is established, the Linux agent goes through a similar network encryption setup to what the Windows version of Turian carries out. See Figure 8 for the network encryption protocol used by the Linux variant of Turian. Upon successful completion of the network protocol setup, it forks off another child process and attempts to spawn a TTY reverse shell :

BackdoorDiplomacy is a group that primarily targets diplomatic organizations in the Middle East and Africa, and less frequently, telecommunication companies. Their initial attack methodology is focused on exploiting vulnerable internet-exposed applications on webservers, in order to drop and execute a webshell. Post compromise, via the webshell, BackdoorDiplomacy deploys open-source software for reconnaissance and information gathering, and favors the use of DLL search order hijacking to install its backdoor, Turian. Finally, BackdoorDiplomacy employs a separate executable to detect removable media, likely USB flash drives, and copy their contents to the main drive’s recycle bin.

BackdoorDiplomacy shares tactics, techniques, and procedures with other Asian groups. Turian likely represents a next stage evolution of Quarian, the backdoor last observed in use in 2013 against diplomatic targets in Syria and the United States. Turian’s network encryption protocol is nearly identical to the network encryption protocol used by Whitebird, a backdoor operated by Calypso, another Asian group. Whitebird was deployed within diplomatic organizations in Kazakhstan and Kyrgyzstan during the same timeframe as BackdoorDiplomacy (2017-2020). Additionally, BackdoorDiplomacy and APT15 use the same techniques and tactics to drop their backdoors on systems, namely the aforementioned DLL search order hijacking.

BackdoorDiplomacy is also cross-platform group targeting both Windows and Linux systems. The Linux variant of Turian shares the same network encryption protocol characteristics and attempts to return a TTY reverse shell to the operator.