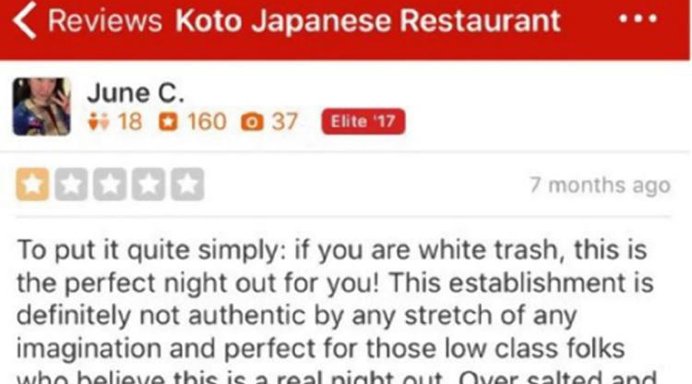 Freedom of Speech is NOT Freedom From Consequences

Pierson College Dean June Chu issued a public apology Saturday after reviews from her personal Yelp account began circulating at Yale.
“There are no two ways about it,” she wrote. “Not only were they insensitive in matters related to class and race; they demean the values to which I hold myself and which I offer as a member of this community.”
The trouble is, so often, people feel they can apologize afterward when their inner thoughts slip out. But we see you now for who you are and what you really think. I live by the code, “Own Your Words.” If I say/write it, I have to stand by it as a true reflection of who I am. I can’t say I regret what I said, although there have been times that I regretted not annotating a link to an article that nobody read and thought those words were mine. I’m sorry for stupid people. Not that I caused their stupidity but for all the headache that they bring with them.
In this case, an elistist, and a Yelp Elite, made known her sheer repugnance for the food of a restaurant and how she sees normal people. You see, she lives in the high tower, that rare air, surrounded by on “her people.” How would she know what the rank and file consider a great night out?
What’s missing from all of this conversation is context. I’m going to go out on a limb here (based on her picture and her name) and say that she’s probably Asian. In the context column, she gets points for likely knowing what authentic food tastes like. However, she went to the place, and you can tell from the menu if it’s authentic or “Americanized” sushi. So loses points for being oblivious and holding all sushi restaurants to the same level.
That’s one upgrade I wish Yelp would make, Context.