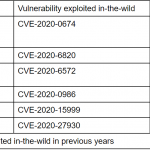 On
Posted on Feb 5, 2021
in category
Categories Top News

The number of reported cases of identity theft in the United States doubled in 2020 year-on-year, the Federal Trade Commission (FTC) has said. In a blogpost marking the start of Identity Theft Awareness Week, the FTC said that it received approximately 1.4 million reports of identity theft last year. The surge in cases is mainly driven by cybercriminals targeting people who have been financially affected by the COVID-19 pandemic.

“2020’s biggest surge in identity theft reports to the FTC related to the nationwide dip in employment. After the government expanded unemployment benefits to people left jobless by the pandemic, cybercriminals filed unemployment claims using other people’s personal information,” said Seena Gressin, an attorney at the agency’s Division of Consumer & Business Education.

Last year, the commission received 394,280 reports of government benefits fraud, a steep increase from the 12,900 reports in 2019. Most cases of identity theft involved fraudsters filing unemployment benefits in the victims’ names.

RELATED READING: Simple steps to protect yourself against identity theft

The recipients of unemployment benefits were not the only victims of identity thieves. The FTC also received reports of identity theft from people whose business or personal data was used by fraudsters to take out loans from government-sponsored small business loan programs. In 2020, reports of fraud concerning personal or business loans more than doubled compared to the previous year, rising from 43,920 to 99,650 reports. However, the commission was quick to point out that not all new reports were connected to the government relief effort, although they did account for a sizeable chunk of the surge in reported cases.

Identity theft was also used by cybercriminals as a means to gain access to federal stimulus payments issued by the United States Internal Revenue Service (IRS) to eligible US residents. The cases were reported to the FTC as incidents of tax identity theft. The number of reports more than tripled year-on-year, with the FTC receiving 89,390 reports in 2020, which was up from the 27,450 in the previous year.

“While many of the reports concerned other types of tax identity theft, the report numbers began to swell when distribution of the stimulus payments began,” Gressin wrote.

Tax identity theft has proven to be a perennial issue that the IRS has been dealing with, especially during tax season, including due to cybercriminals committing tax refund fraud by filing taxes in the victim’s name. In December 2020, the IRS expanded its identity protection program to all eligible U.S. tax-payers in an effort to combat various tax scams.