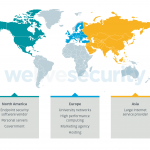 On
Posted on Feb 3, 2021
in category
Categories Top News

ESET researchers have analyzed malware that has been targeting high performance computing (HPC) clusters, among other high-profile targets. We reverse engineered this small, yet complex, malware that is portable to many operating systems including Linux, BSD, Solaris, and possibly AIX and Windows. We have named this malware Kobalos for its tiny code size and many tricks; in Greek mythology, a Kobalos is a small, mischievous creature. Today we publish a paper titled “A wild Kobalos appears: Tricksy Linux malware goes after HPCs” describing the inner working of this threat.

Perhaps unrelated to the events involving Kobalos, there were multiple security incidents involving HPC clusters in the past year. Some of them hit the press and details were made public in an advisory from the European Grid Infrastructure (EGI) CSIRT about cases where cryptocurrency miners were deployed. The EGI CSIRT advisory shows compromised servers in Poland, Canada and China were used in these attacks. Press articles also mention Archer, a breached UK-based supercomputer where SSH credentials were stolen, but does not contain details about which malware was used, if any.

We’ve worked with the CERN Computer Security Team and other organizations involved in mitigating attacks on scientific research networks. According to them, the usage of the Kobalos malware predates the other incidents. While we know Kobalos compromised large HPC clusters, no one could link the Kobalos incidents to the use of cryptocurrency malware. The malware and the techniques described in these other attacks are different. We also know Kobalos is not exclusively targeting HPCs: we found that a large Asian ISP, a North American endpoint security vendor (not us), as well as some personal servers were also compromised by this threat.

Thorough analysis of Kobalos revealed that it is sometimes possible to remotely determine if a system is compromised by connecting to the SSH server using a specific TCP source port. Using that knowledge, ESET researchers scanned the internet to find potential victims. We were able to identify multiple targets of Kobalos, including HPC systems. We notified all identified victims and worked with them to remediate.

Kobalos is a generic backdoor in the sense that it contains broad commands that don’t reveal the intent of the attackers. In short, Kobalos grants remote access to the file system, provides the ability to spawn terminal sessions, and allows proxying connections to other Kobalos-infected servers. Figure 2. Overview of Kobalos features and ways to access them

There are multiple ways for the operators to reach a Kobalos-infected machine. The method we’ve seen the most is where Kobalos is embedded in the OpenSSH server executable (sshd) and will trigger the backdoor code if the connection is coming from a specific TCP source port. There are other stand-alone variants that are not embedded in sshd. These variants either connect to a C&C server that will act as a middleman, or wait for an inbound connection on a given TCP port.

Something that makes Kobalos unique is the fact that the code for running a C&C server is in Kobalos itself. Any server compromised by Kobalos can be turned into a C&C server by the operators sending a single command. As the C&C server IP addresses and ports are hardcoded into the executable, the operators can then generate new Kobalos samples that use this new C&C server.

In most systems compromised by Kobalos, the SSH client is compromised to steal credentials. This credential stealer is unlike any of the malicious OpenSSH clients we’ve seen before, and we’ve looked at tens of them in the past eight years. The sophistication of this component is not the same as Kobalos itself: there was no effort to obfuscate early variants of the credential stealer. For example, strings were left unencrypted and stolen usernames and passwords are simply written to a file on disk. However, we found newer variants that contain some obfuscation and the ability to exfiltrate credentials over the network.

The presence of this credential stealer may partially answer how Kobalos propagates. Anyone using the SSH client of a compromised machine will have their credentials captured. Those credentials can then be used by the attackers to install Kobalos on the newly discovered server later.

Analyzing Kobalos isn’t as trivial as most Linux malware because all of its code is held in a single function that recursively calls itself to perform subtasks.

This makes it more challenging to analyze. Additionally, all strings are encrypted so it’s more difficult to find the malicious code than when looking at the samples statically.

Usage of the backdoor requires a private 512-bit RSA key and a 32-byte-long password. Once authenticated, RC4 keys are exchanged and the rest of the communication is encrypted with them.

The network protocol is summarized by the sequence diagram. From a network perspective, it is possible to detect Kobalos by looking for non-SSH traffic on the port attributed to an SSH server. When the Kobalos backdoor communicates with an operator, there is no SSH banner (SSH-2.0-…) exchanged, neither from the client nor the server.

We have suggested before setting up two-factor authentication (2FA) for connecting to SSH servers. Kobalos is another case where 2FA could have mitigated the threat, since the use of stolen credentials seems to be one of the ways it is able to propagate to different systems.

We were unable to determine the intentions of the operators of Kobalos. No other malware, except for the SSH credential stealer, was found by the system administrators of the compromised machines. We also didn’t have access to network traffic captures of the operators in action.

The way Kobalos is tightly contained in a single function and the usage of an existing open port to reach Kobalos makes this threat harder to find. Hopefully the details we reveal today in our new publication will help raise awareness around this threat and put its activity under the microscope. This level of sophistication is only rarely seen in Linux malware. Given that it’s more advanced than the average and that it compromised rather large organizations, Kobalos may be running around for a little while.

A comprehensive list of Indicators of Compromise (IoCs) and samples can be found in our GitHub repository.

For any inquiries, or to make sample submissions related to the subject, contact us at threatintel@eset.com.

We would like to acknowledge the work of Maciej Kotowicz from MalwareLab.pl who also analyzed Kobalos independently and with whom we mutually share results. He presented on this threat at the Oh My H@ck 2020 conference.

This table was built using version 8 of the ATT&CK framework.