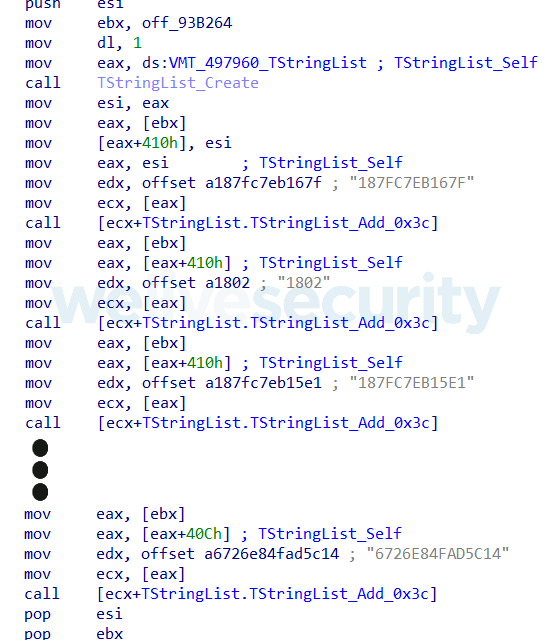 On
Posted on Jan 22, 2021
in category
Categories Top News

Vadokrist: A wolf in sheep’s clothing

Another in our occasional series demystifying Latin American banking trojans

Vadokrist shares several important features with families we have described earlier in the series, namely Amavaldo, Casbaneiro, Grandoreiro and Mekotio. We recently published a white paper dedicated to documenting the similarities between Latin American banking trojans, whereas this blogpost series focuses more on the detailed analysis of one family at a time.

Vadokrist is written in Delphi. One of the most notable characteristics is the unusually large amount of unused code in the binaries. After further examination, we believe this is an attempt to evade detection and dissuade or slow analysis. We were able to link some of the code to existing Delphi projects, such as QuickReport.

Vadokrist stores strings inside string tables. It used to contain an implementation of a string table identical to Casbaneiro (illustrated in Figure 1); however, some recent versions of this banking trojan switched to using multiple string tables, each for a different purpose (list of targets, general configuration, backdoor command names, etc.). The vast majority of Latin American banking trojans collect information about the victim machine (typically computer name and version of the Windows OS) when first run. The only information Vadokrist collects is the victim’s username and it does so only after initiating an attack on a targeted financial institution, not, unlike most other Latin American banking trojans, at install time.

To ensure persistence, Vadokrist utilizes either a Run key or it creates a LNK file in the startup folder.

Its backdoor capabilities are typical for this type of threat, being able to manipulate the mouse and simulate keyboard input, log keystrokes, take screenshots, and restart the machine. It is also able to prevent access to some websites, which it does in a rather clumsy way by killing the browser process when the victim attempts to visit such websites. We believe this technique is used to prevent the victims from accessing their online bank accounts once the attackers have compromised it, aiding them in retaining control.

The majority of Vadokrist binaries implement a cryptographic algorithm we have seen in other Latin American banking trojans (namely Amavaldo and Casbaneiro) that we have dubbed TripleKey. Vadokrist uses this algorithm to protect its strings, and occasionally payloads and remote configurations as well (we dig deeper into this topic later). For clarity, we have implemented the algorithm in Python, as seen in Figure 2.

Besides that, we have seen Vadokrist using RC4 in some of its recent binaries and, in the past, TwoFish as well. This is quite rare among Latin American banking trojans as most of them never use generally known cryptographic algorithms.

Recent spam emails distributing Vadokrist contain two nested ZIP archives that contain two files – an MSI installer and a CAB archive. If a victim executes the MSI installer, it locates the CAB archive and extracts its contents (an MSI loader) to disk. It then executes an embedded JavaScript file that adds a Run key entry, making sure the MSI loader is executed on system startup. Finally, the script restarts the machine. On startup, the MSI loader executes an embedded DLL – the Vadokrist banking trojan. The whole process is illustrated in Figure 3. Notice that no actual downloader is in place; the banking trojan is distributed directly by these spam emails. The JavaScript file is worth mentioning because of its obfuscation. It leverages how the comma operator (,) works in JavaScript and abuses it to greatly reduce readability and possibly to bypass emulation. It obfuscates conditions using the logical AND operator (&&) in a similar manner. See an example in Figure 4. We observed Vadokrist, like most other Latin American banking trojans, using several implementations of the typical distribution chain. We won’t cover all of them, but two are worth mentioning. We have seen Vadokrist sharing a Delphi downloader with Grandoreiro and a whole distribution chain with Mekotio – in fact, the one marked as Chain 1 in our blogpost about Mekotio.

Vadokrist occasionally relies on DLL side-loading with a specific injector to decrypt and execute the banking trojan. This injector is identical to the one used by Amavaldo and implements the aforementioned TripleKey algorithm for data decryption.

Vadokrist utilizes remote configuration both in downloaders and the actual banking trojan, usually hosted on public storage services such as GitHub.

The configuration file is usually encrypted, either by TripleKey or RC4. In Figure 5, you can see that in both cases the data can be decrypted without any additional knowledge – in the case of the TripleKey method, we can extract all three keys from the end of the string and in the case of RC4, we can derive the key from the password. In the case of the latter, the encrypted data is further encoded by base64.

The delimiter also changes from time to time. So far, we have seen three different characters used: “|”, “!” and “/”.

Now that we know how to decrypt the configuration file, let’s examine its contents. In the case of the banking trojan, the result is easy to understand, as it is the IP address of a C&C server. For downloaders, the format is a bit more complex, as illustrated in Figure 6. To simplify, we recognize a configuration with an optional ID and six fields:

Two of these fields may require further explanation. If the installation flag is set to “T”, all three parts of the installation path will be used; otherwise the first one will be ignored. The only thing that is sent to the notification URL is whether an application Core.exe is running – a check familiar from other Latin American banking trojans that try to detect the presence of anti-fraud software Warsaw GAS Tecnologia.

The dynamically changing format of the configuration file indicates Vadokrist is under active and continuous development.

In this blogpost, we have dissected Vadokrist, a Latin American banking trojan that is focused on Brazil. We have shown that it has typical characteristics of a Latin American banking trojan – it is written in Delphi, offers backdoor functionality and targets financial institutions. Its main deviation from the typical implementation is that it does not collect information about victims right after successfully compromising their machines.

We have covered its encryption schemes, distribution and execution methods and remote configuration formats. Vadokrist seems to be connected to Amavaldo, Casbaneiro, Grandoreiro and Mekotio, other Latin American banking trojans described earlier in our series.

For any inquiries, contact us at threatintel@eset.com. Indicators of Compromise can also be found in our GitHub repository.